Doctor Who — The Time Meddler

Posted on September 26, 2018 by lordeelsmusic 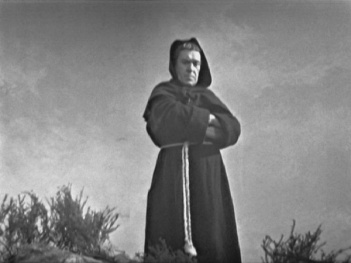 Their names are William Russell and Jacqueline Hill – I feel that I should have at least credited the actors once in their duration as Ian and Barbara and I’m not sure I ever did. I miss them but it’s time to move on. The story opens with the lamenting of our old companions and Steven arriving from the back rooms of the TARDIS and collapsing.

The Doctor and Vicki help Steven recuperate and find he fled from Mechanus and stumbled into the machine. Of course once they explain the TARDIS he is fairly skeptical  leading to the Doctor to give one of the best speeches that I won’t even save for the quote section.

They resolve for Steven to get cleaned up, then they explore, meanwhile a monk has been watching the TARDIS appear.

The crew are in 1066 in Britain, just before the battle of Hastings, as the Vikings are preparing to invade. Steven remains skeptical but he’ll buy it by the end of the story. Anyway the group are looking around the local settlements, may I remind you from two sentences back, in 1066, and the Doctor hears monastic chanting from the monastery, he investigates and finds the music being played from a record player and being projected out. Welcome to the first pseudo-historical story! These stories will kill the full historical by setting a story in the past but having an alien or sci-fi presence here. I mentioned this in the post of The Crusades… I had so little else to mention.

The Doctor is captured (of course), by the monk that we saw earlier. He’s played by Peter Butterworth, much more famous for the Carry On movies later. He locks the Doctor in and Steven and Vicki are forced to follow his trail it all sort of ends up with them at the monastery at the same time as other visitors, distracting the monk, so when they find the Doctor’s room it turns out he is already being clever and has found alternative means of escape; a tunnel which the companions follow.

Right I best get down to two main points here. Firstly this is a story which is progressive. It’s the 60’s so it’s all in subtext but we have an elephant to mention. Every story has its “locals” but very rarely do they go through the heavy issues that happen in this story. This story, again through subtext, deals with rape. It is seen through how the character is handled both before and after the event and it happens due to the invading Vikings. For the time the handling is surprising frank and I think credit goes to the head producer Verity Lambert for that. I don’t want to dwell as this isn’t the point of the reviews but merely comment that its depiction is progressive for the time and, better, progressive for a lot of times to come. We’re only now catching up. Check it out… I will leave this aspect for now…

The episode builds towards the idea of a character out of time and how can it happen. It turns out that the monk has plans. The Doctor captures the monk at sword point and demands answers but meanwhile… It’s all revealed when Vicki and Steven investigate a stone tomb in the Monastery.  There’s an opening and the tomb is bigger on the inside:

Note the words “A TARDIS” as it’s the first time you’ll hear the idea there is more than one. The monk is a renegade member of the Doctor’s people (Time Lord) that is stealing historical artifacts, causing problems and taking advantage of future knowledge. He has to be stopped so as they make their escape, the Doctor steals a vital component by yanking it through the monk’s TARDIS’s doors. It’s crucial and stops the technology that let’s the inside be bigger than the outside. The monk can’t get in and our crew can leave with the Doctor winning the day… and….

That’s season 2 over! Seasons 3 and 4 are the least complete in Doctor Who with a lot of junked episodes. It get’s a bit more tedious and characters are a little less pleasing to watch, certainly for a while but it’s only a few episodes. Join my continuing journey!

8/10 (one of the best Hartnell’s to watch standalone)

Next time:
Season 3 – Companions galore! The final 1st Doctor Dalek story. The shortest story in Doctor Who history (25 minutes and it doesn’t contain any of the regular cast). We also have the longest and this is going to be the toughest (it’s 5 hours long). Verity Lambert (first BBC female producer) leaves, Hartnell is looking more fragile. It’s all to come and it’s worth powering through as well… If you know Doctor Who, there are only 12 William Hartnell stories left… and then there’s an event…

This entry was posted in Doctor Who, Music. Bookmark the permalink.

1 Response to Doctor Who — The Time Meddler