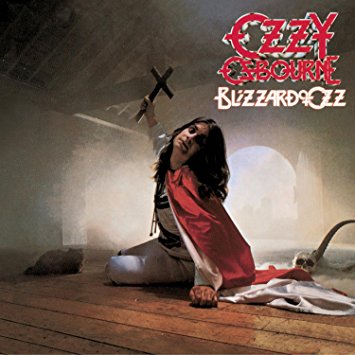 I think it’s fair to say I’ve had a lot of albums recently that I would never normally expect to listen to – but THIS, I’m excited about. The undisputed legend, Ozzy Osbourne. I wouldn’t say I’m a huge metal fan, but I do love a bit of Crazy Train and the prospect of some squealing guitars is thrilling.

The album opens with I Don’t Know, what I would probably term Classic Ozzy. Chugging, echoing guitar and Ozzy’s signature half-tuneless, half-shouting, all wonderful voice. It’s remarkably sparse – if you’re used to modern metal, that might throw you off. There’s maybe two guitars, a bass and a drum, but all of these things are following a clear, defined rhythm. There’s no fancy fillers. It breaks down into a Floyd-esque middle eight (considering this is the 80s, we can’t be surprised) and then, finally, the guitar solo. Gratuitous, flamboyant, over-the-top.

ALL ABOARD. Crazy Train is probably one of Ozzy’s best known solo songs, and I think for really good reason. The shout, the riff, that driving tempo. It’s almost cheesy-pop in its verses, and then absurdly catchy in the chorus. Here we get some more filler, some more lace-and-frills.

Goodbye to Romance is a total shock. It reminds me more of an ELO-style ballad than a metal song. Ozzy’s voice isn’t truly suited to this kind of song (he doesn’t have an amazing range, and really, he’s not a skilled singer), but it does have a whining, plaintive quality that lends a certain kind of sadness to it. Some of the lyrics might be aimed at his old band members: Goodbye to romance, Goodbye to friends, and then, goodbye to friends, and to all of you. It’s not a love song, in my eyes. It’s a song of regret.

It’s followed by Dee, which showcases some beautiful classical guitar skills by guitarist Randy Rhoads. But there’s only 50 seconds of it before you dive headlong into Suicide Solution, a pure and simple metal song, and also one of Ozzy’s most controversial songs.

Some of the guitar solos in this album are insane. The level of skill involved is beyond my comprehension. I have to say, though, that many songs on the album follow a very cut-and-dried formula for writing a song: verse, chorus, verse, chorus, middle eight, verse, chorus.

The other thing I’ve noticed, too, is the songs are all long. On a ten song album. seven run over 4 minutes; four of those songs run over 5, and the longest is a whopping six minutes long. As previously mentioned, because the structure of each song is very samey, you do get the feeling about 3 minutes into every song that you know exactly what’s coming, and you tend to switch off. There’s a strange tendency to fade out, too, that is baffling.

Mr Crowley, however, breaks from this cookie cutter approach. It starts with this odd synth organ sound, again very Floyd reminiscent, like you’re going into some 80s B-Movie, before it becomes more recognisable, and it runs more like a poem.

Then, there’s the bizarre, almost medieval Revelation, which I think is my favourite song on the album. It’s a pleading, sonorous thing of tubular bells and wooden flute, and Ozzy begging, Please let my mother live. It’s like a climactic song from a goth musical, where the main characters all come together for the final act, and it’s wonderful. Piano solo, guitar solo, the tempo rising, the crescendos. Who cares that this song is 6 minutes long, anymore? It plays to every last second of it.

It blends seamlessly into Steal Away (The Night), more classic metal, and the album closes with You Looking at Me, Looking at You, which feels very much like a partner song to Crazy Train.

Is This Album For You?

It’s a tricky one. If you’re into classic metal, I’d say it’s definitely worth a good listen. If you think you don’t like metal, this is a nice, easy album to give a go. It might surprise you. It is definitely not a hard metal album, and if you’re looking for stellar vocals, don’t bother. It is wonderfully Ozzy, though, and that’s hard to deny.

Writing: 6/10 The skill of the guitar and Revelation bumps this up.