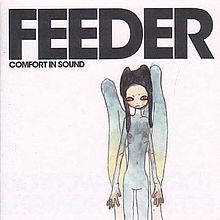 On paper, this album is the fourth studio album by Feeder but this statement is a gloss-over. This album represents the first album after drummer Jon Lee’s suicide and the whole album is a representation of this. It’s not a rebirth – it would be callous to suggest this, it’s a dedication and it is vital you keep this in mind. The album was already written musically in 2001 but as a selection of instrumental tracks – the lyrics came later and were then modified for Lee. Let’s dive in.

Just The Way I’m Feeling is 90’s and there’s no doubt about it. Somehow it just seems an homage to Oasis to me; I’m not detracting by saying this, just it is a hark-back. I like the song and actually it’s the one that everyone remembers with its straightforward guitar riffs and vocal harmonies but as a representation of the album… It’s the wrong track. But the next one…

Come back Around is the albums truer opener. The music video speaks volumes, you should watch it. It’s encapsulated in the lyrics:

Overall, the feel is much more of the times and feels like the albums anchor point.

The album features a lot of polished tracks that instrumentally are set up already. Helium has one of those, admittedly safe choruses that embodies the early 00’s in its chord sequence. It’s neither bad nor good but there is a minor disperacy between lyric and accompaniment. It doesn’t stay. It’s just present here and it’s entirely down to track ordering.

I’m going to skip ahead to the titular track, Comfort In Sound. It’s the same well oiled sounds and I’m beginning to find my position. The album was what it was in its time but it is so zeitgeist-y. I think the problem stems from the fact that the music preexisted. For me, lyrics as a whole are beautiful but they are definitely part of a whole and they maybe don’t gel as well as they might.

The following track Forget About Tomorrow get’s there finally!

I so appreciate what’s going on here! We’re finally getting to that mourning stage – the celebration. Now, it’s starting to work! When is a dedication ever going to work until you address the issue?! This track is one of the epitomes of the album’s point. The following is equally as poignant! Summer’s Gone, of course references the passing.

“Alex, stop,” I hear you cry. “Why must you colour the album in this kind of context?”

Because it was the aim! I just want to provide a reflection of the aim of the album and it’s doing it! There is a level of love, sadness and poignancy that colours this album but it also fundamentally is a product of its time and it’s so interesting to see how this dichotomy plays out!

Quick Fade, for me, is the culmination of this album. Here is the underrated honest track. I honestly listened to this with a moment where I thought I was finally paying respects, and so were the lyrics. This is it:

This is love. The chords and the instrumentation are both perfect for this and you will not convince me that this is not the best track of the album.

All of a sudden we’re on the outro of the album with the last three tracks. I am not going to talk about Find The Colour directly but what I am going to do is tell you to listen to Quick Fade and then listen to it’s successor. Why anyone would separate these tracks is just beyond me. If you like Find The Colour, released as a single, listen to Quick Fade… Here is where my track analysis ends. Well… actually, if you have time, maybe let the album close.

The album is interesting. It is, admittedly something that has been inflated to be more than it was intended to be; this shows in places… but overall it’s a labour of love. I’ll score it to my preference but I respect what it was a whole lot.

Is this album for you?

I really don’t know! It’s very of its time and, to be honest, that early 2000’s sound isn’t for everyone. What I will say is that it encapsulates so much more than just it’s time. Maybe do take the time to listen to a dedication… It takes them a little while to get there but boy do they