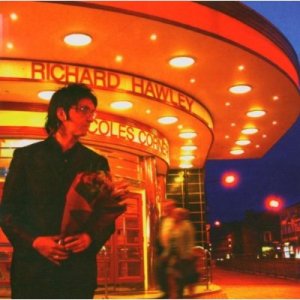 Listening to lots of disperate styles and having a generally broad taste can very occasionally lead to something I will call “phonic fatigue”, cause it sounds fancy. Basically, sometimes an album which hasn’t done something odd, different or distinct has the danger of being shouted down by the other choices and it can sound bland. It’s so important to hear an album for what it is, and with that we have Coles Corner.

Richard Hawley has an interesting timbre to his voice, what I’ll call 75% Johnny Cash, 25% Nat King Cole and the different aspects lend to the different style of tracks.

The album opens with the titular track, Coles Corner; it’s an ambling track with a backing from strings and Hawley’s honeyed vocals enter:

Hold back the night from us,
Cherish the light for us,
Don’t let the shadows hold back the dawn.

For me this is the best track on the album, an easy listening low paced track you would expect to hear in the 50’s and yet it isn’t dated; the feel is lovely overall.

I have to contrast immediately with the track Darlin’ Wait For Me. Lyrically this is a pretty track with a man separated from his partner hoping she is still thinking of him. But. I have a problem with this track; I have to say it, it sounds like someone doing a Johnny Cash impression and for me it’s quite distracting. Yes, individual style is present but that sound never quite vanishes. On this album you’re going to get a lot of this Johnny Cash feel in varying degrees.

The sound is a little more present in songs such as Just Like the Rain and I Sleep Alone, both having the feel of being on a train heading through rural America (Hawley is British). They’re good, solidly written songs with a nice retro feel. Indeed I don’t want to be too harsh as for an album released in 2005, it’s hardly mainstream and it’s well put together.

The song Hotel Room just feels content, of course it’s supposed to, singing about his partner “here in my arms” but the music backs this up, with the sort of relaxed Hawaiian guitar. The chords just ooze content and comfort; it’s quite lovely.

For me the album had that slight distraction but it was a personal thing. I opened with the paragraph I did for a reason; it’s important to remember that you really can get value and substance from an album that’s reserved in it’s features. It’s a solid listening experience.

Is this album for you?

It’s easy listening and solidly performed. I’d put it on for friends in a low energy atmosphere and I’m sure it would go down well. There is a rich quality to the vocals and the accompaniment is very well put together. In fact any quibble will likely come from the fact that the album is on the whole quite slow paced, even in the more energetic songs. Definitely dip into a few songs like Coles Corner, Hotel Room and I sleep alone and see what you think.